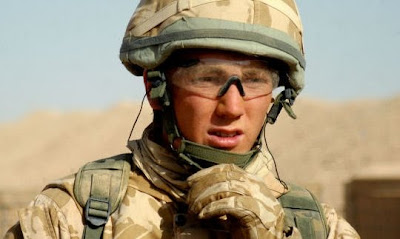 Lance Corporal Ashley Jones REME blogs from Afghanistan for Channel 4 News about the stress in dealing with the unknown while his fellow soldiers are out on patrol.

I was initially meant to be on an op going into Sangin, but then the day before we were to be deployed, I was told I was going to be staying behind. This was because I am a rifleman and they needed other assets for this particular situation.

I was quite disappointed at first but then I came to terms with it and decided I needed to just contribute as much as I could and become proactive. Not everyone can go every time and sometimes you just have to be patient and throw your weight behind the others.

Besides, there was a lot of stuff that needed to be done back at Bastion before the op began. We’d also been warned off for the next job which was coming up and which we needed to prepare for. Being the vehicle mechanic, I went around all the vehicles just to make sure they were all prepped, ready and working.

We assisted with the re-supply, getting everything together, making sure the Quartermasters’ staff didn’t have any difficulties picking up the kit and they could take it immediately to the air head to go straight to the guys out on the ground when they left.

It was pretty hard work back here. But it was the stress, I think, of knowing we weren’t going out with the lads and not knowing what was happening all the time which was the most difficult.

The lads got up at 3 o'clock in the morning ready to deploy. I got up, had breakfast with them and went down to the aerial reconnaissance detachment to watch them land.

It was quite awe inspiring watching them on the large screens, stepping off the helicopter – all in real time. Everyone seemed to know exactly what they were doing when they got off, straight into formation.

From there, I went back to the vehicle compound and straight back to equipment maintenance. That was the main issue. When we are using vehicles out on the ground, some of them are prone to breaking, so if I can go and prevent that now, it saves a lot of time and hassle on the ground. Prevention is better than cure.

All the time we were thinking about what they were doing and if they were all ok. I felt like a worrying mother, whose children were out playing after dark.

I was still asleep when everyone came back in again. But we got up, and because I hadn’t been out, I was someone they could talk to, and download all their war stories on me before they themselves got their heads down for a few hours worth of rest before the routine started again.
Posted by Media Ops Blog at 1:46 AM