We, like everyone in Afghanistan, are in suspense, waiting for the election results. I attended the first of the long-awaited IEC press conferences on Tuesday 25 August, to announce the first 10% of results for the presidential elections. Everyone was there, from journalists to researchers, to election observers and diplomats. The atmosphere was buzzing, with journalists deep in conversations with contacts at the corners of the room before the conference started, and everyone comparing notes so far.

We all eagerly scribbled down the figures when they finally arrived, in Dari and English, checking with each other on decimal points and provinces. Journalists were the first to start calculating what they might mean for the overall turnout and result, ready for release on the wires - although it remains guesswork at this stage.

Earlier this week I visited the National Tally Centre, where all the results from the provinces are being collated. Beneath an imposing looking hangar in the IEC compound is an impressive data entry centre, with lots of young people sitting at computer screens tapping away at keyboards. I chatted to a couple of the candidate agents observing in the gallery section, and asked them where the results had come in from, and whether any had been quarantined. After one candidate agent moved the conversation on to Iranian pop music, I beat a hasty retreat.

I’ve just been looking at the new website www.iec.org.af/results, with an attractive interactive map, but again, just not quite enough information to draw conclusions on the overall results. I and my colleagues will continue to follow the results through the IEC website and their press conferences - the crawl up the hill to the Intercontinental for those is made up for by its striking views over Kabul.
Posted by Media Ops Blog at 12:29 AM 6 comments: 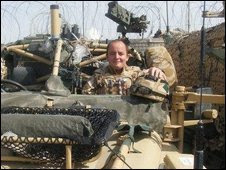 This week I will be short with my letters as we have been struck once again by the loss of one of our Mercian brothers. As you will have seen in the news we are currently engaged with the insurgent forces on many fronts, as we seek to deprive him of his last hiding places in the wider Helmand Province.

Be in no doubt that we are in the fight of our generation, the future of this place will be decided in part by what we do now. In such times we live that young men will give all and in doing so sacrifice their precious futures.

On the news they will show impressive graphic projections and they will discuss the merits of one vehicle against another until you the supporters of the Regiment are confused or disillusioned. Allow me if I may to make things very simple, the fight we are in is to dominate key ground, this ground has been the home of insurgents, bandits and drug lords for some time and if we are to proceed with our mission of bringing peace we must remove these men and replace them with stability and law.

Key terrain like this can only be taken by soldiers making the hard yards on the
ground. For these men their world is what they can see in the front of them as they fight metre for metre with a ruthless cunning and determined enemy. With a sweep of his or her arm the news presenter will allude to the ground being covered and taken, the reality of which is that every metre will be paid for with blood sweat and brute force.

This is nothing new and Infantry soldiers have done the same thing since records began, that is why they exist and are so very much in demand here, where ground that is not held by force will be occupied and subjected to the lawlessness of insurgents and violent men.

At the beginning of the tour in an interview I was asked what I thought of the troubled times that may be ahead. My answer is the same now as it was then, your Mercian Soldiers and their colleagues from many fine Regiments will be more than the match for those who believe we will be forced to leave here in ignominy and defeat. Despite the cost we will become stronger as your soldiers become tempered like steel in the Helmand fire.

As a soldier not currently near the fighting I take little credit for the bravery, fortitude and sheer tenacity of those who are fighting in this our greatest endeavour. They have my greatest respect as I am sure they do yours.

To finish this weeks short letter I would urge you to continue your support of your troops here and if you have a quiet moment in your hectic lives spare a thought for the young men and their families for whom the world is in darkness. I have written a short poem that gives voice to some of my thoughts at this time.

DUTY DONE
A makeshift cross on broken soil,
The final marking of the soldiers toil.
Gone to serve at General Command,
In a distant, unforgiving land.
A place where death and danger walks,
Among the ripened poppy stalks,
And on that final, fateful day,
The enemy stole his life away.
They took his future, but not his past,
Among his friends it will always last.
At home the grieving has just begun,
For a grieving mother for her fallen son.
Many will stop and question why,
This young many should early die.
Beside the arguments and great debates,
The soldier died beside his mates.
As all that’s left when the enemy attack,
Is the friend behind you, watching your back.

Until next week be careful be safe and be good to one another.
Posted by Media Ops Blog at 11:46 PM 22 comments: